My very first Thursday Tryout post for my new link up! I mentioned before how exciting Halloween is for me in a previous post. I am a super fan of horror/thriller movies and even books! Plus I have a huge sweet tooth, so yes I am all about Halloween!

Another thing I am into is roller coasters! So the thought of a theme park FULL of Halloween fun, really excited me! I had been to Knott’s Scary Farm before with some friends.  Sadly to my dismay I wasn’t all that impressed. The decorations were mediocre. I wasn’t startled or spooked once. In fact I ended up accidentally tripping one of the ghouls that tried scaring me by sliding in front of me! Of course the rides and being with friends made the experience a fun one, but I had been very excited for the “scary” part of the experience. Since my experience wasn’t all that “horrific” and the ticket prices for these events started to rise, I avoided any further interest in attending the Halloween theme park craze.

That was until my friend and I went on a horror movie binge one year and then saw some of the movies we had been watching advertised as mazes and scare zones at Universal Studios Halloween Horror Nights. Sadly we didn’t attend that year, but I kept watch on the event every year after. I think its awesome that Universal Halloween Horror Nights is able to utilize movies as themes for their mazes and scare zones. Finally last year I decided that I was going no matter if I had to go by myself! My boyfriend kindly said he’d go with me, but only if we got front of the line passes because he hates to wait in theme park lines. I excitedly agreed with no concern or protest for the cost, and was so glad we went in the end.

I was surprised to have actually been startled on several occasions. Particularly I found out that I am not a fan of dangling body parts or anything! For some reason this part of certain mazes really freaked me out, and I went slowly forward trying to avoid them from touching me. My boyfriend thought this was hilarious as he “sneakily” swayed things right into me leading me to scream my way out!

We loved it so much last year that it wasn’t even a question of going this year! I was just as if not more excited to go again. Particularly because this year they had a Halloween maze of Michael Meyers, one of my favorite Halloween themed movies! Plus the Jabbawockees were performing this year, which got my boyfriend’s excitement up!

I would definitely suggest getting the Front of the Line Pass if you plan on attending, unless you are super cool with waiting in lines that can rack up to one or two. This is something my boyfriend was in no way going to have! We literally waited no more than five minutes for a maze or ride all night long, and got to experience every attraction of the event! If you don’t get the Front of the Line Pass, you might really have to make a plan of which parts of the park you really want to experience first and hope to get to the rest.

The Jabbawockees were our first stop! I personally liked the performance. It was energetic and fun. They even got people dancing in the audience, and one lucky girl got to dance on stage with them. Sadly we didn’t get there early enough to get the priority seating for Front of the Line. We sat sort of on the side, with good view but not the best view. My boyfriend even wanted to see the show a second time, but time didn’t permit us from doing so.

My favorite and the first maze we went to was the Michael Meyers, Halloween one. I was skeptical about this maze, because literally how creative could it get? I imagined it just being Michael Meyers at every corner! Which is exactly what it was, but somehow Universal Studios managed to make this super terrifying! I’m not easily scared or startled, but this maze had me frazzled. Not only was he creeping up on me at every corner, but the end of the maze really got to me. In order to exit you have to go through a mirror room with nothing but a bunch of Michael Meyers men standing around everywhere! The scary part is you don’t really know which are real and which are not. I had the privilege of going first, and I was quite terrified. I think what gets to me the most is not being in control of the situation which I was definitely feeling at that moment. 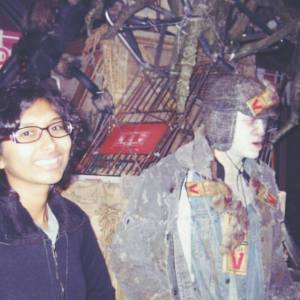 The Terror Tram this year was of The Purge and consisted of a mini hike uphill! Luckily they have a little shuttle you can take to the top if you can’t handle the walk up. These guys particularly enjoy chasing you and slamming their “weapons” on anything around you to make a loud noise in hopes of startling you. I think I enjoyed the Terror Tram much more last year as The Walking Dead set-up though. A part I thought was cool was a side stop where they had “Norman Bates,” from Psycho outside the Bates house for people to take pictures with. The guy was super eerie and creepy. When I got up to him he told me I shouldn’t be smiling and then did a great pose of pretending to slice my throat in our photo. Sadly the person didn’t take our picture right so it didn’t come out, and I was too hyped up to make sure the photo was checked afterwards.

The particularly scary part of the Purge for me was when we went to the lower mazes like This Is The End and Crimson Peak. They randomly dump you at a spot right in front of one of The Purge scare zones. It is super creepy because they have guys there waiting for you with chainsaws and machetes. It was even more eerie because we were the last ones off the tram and everyone had long left us behind! Just the scene itself freaked me out, like they really wanted to kill me. I was briefly chased by one of the guys at the start! He probably wouldn’t have stopped chasing me in circles until I fled behind my boyfriend and the next tram started to roll in. The rest of the little scare zone wasn’t too bad.

In fact the rest of the mazes were pretty average in my eyes. Of course I had some scares of those hanging bodies, again! Other than that it was mostly just entertaining and a few startles here and there. I was particularly confused about the This Is The End maze since the movie is technically a comedy. This maze wasn’t really startling, but the 3-D effects were cool at some points, but kind of gave me a headache after awhile and the maze was for whatever reason disgustingly smelly!

The rides of course are always fun, especially the Mummy’s Revenge. I hadn’t been there in a while that I forgot how fast the ride was. Even steep the Jurassic Park drop seemed steeper to me! I had a moment where I really felt like I was going to fly out! Definite fear! I always like doing that one first since you have a good chance of getting wet! Then following after Mummy’s Revenge, to “dry up” from the super fast speed of the ride!

Overall it was a fun night and a successful tryout! I am definitely returning next year! I’m guessing a lot of other people enjoyed the experience too because Universal Studios just recently extended Halloween Horror Nights till the first week of November! So if you have the funds, a chance, and are into this kind of Halloween fun I would suggest you take advantage and get a ticket!

Let me know if you’ve had the chance to experience Halloween Horror Nights and how you enjoyed it or if you are planning on going what are you looking forward to!?

Nice to Meet You. My Name is Caroline.

Let’s Get Strong, Healthy, and Confident Together!